The Bowling Club has re-opened for the 2022-23 season and meets each Wednesday and Saturday evening at 8.00pm in the Parochial Hall.

League matches are played on week nights, some at home and some away. The Club would welcome new players and is open to anyone in the area, not just members of the Parish. For further details contact Patricia on 028 9266 5310 or Mobile 07713 257 691.

Annahilt Parish Bowling Club was formed in the mid 1960’s and is probably the oldest club in the immediate vicinity. While a Parish organisation, membership is open and over the years has been greatly supported by those from the locality.

The club meets most Wednesdays and Saturdays in the Parochial Hall from mid-September until the end of March and participates in the Lisburn and District Indoor Bowling League. Home matches are played on Wednesday evenings and Away matches could be any weekday evening. Saturday evenings are bowling for pleasure or practice and at least once a month on a Saturday there is a competition night which counts towards annual trophies.

There is no lower or upper age-limit and all are welcome.

For the last number of years the club has run a very successful Open Pairs tournament at the end of the season, when players travel from near and far and from both Northern and Southern Ireland. In more recent years the club has donated to local charities and in 2019 the chosen charity was The NI Peri-Natal Trust and the sum of £1000 was handed over to Alison Harrison-Mitchell to purchase equipment for the charity in memory of her baby daughter Sienna. Alison and her husband David have raised thousands of pounds for the charity over the past twelve years. 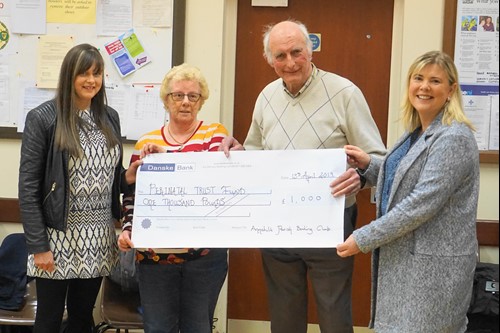